Python: The Programming and Development Language of the Future 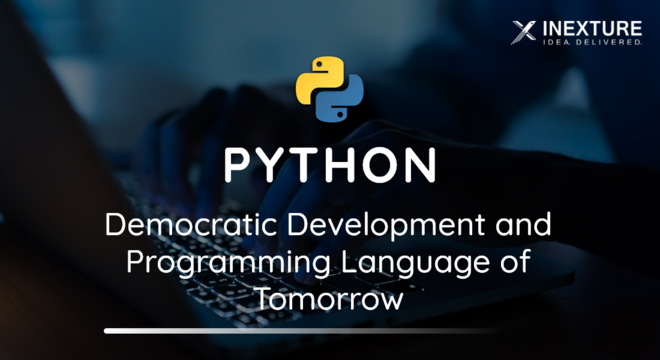 In 2021, Python celebrated the 30th anniversary of its launch and showed no signs of slowing down in developing as the most preferred programming language in the contemporary world.

It must be mentioned that Python’s future-making ability is no mere accident: years of steady corporate investments from companies like Google and Amazon Web Services have ensured that Python has the best support ecosystem it needs to thrive as a programming language.

As the global business and entertainment ecosystems take a giant leap through the advancements offered by big data analysis, Python is poised to enable the pivot. By making tools built specifically for tasks such as complex calculations, data visualisation problems, and traffic-based content management, Python is fast becoming the bedrock of Data Science and Smart Analytics. Let’s take a closer look at how and why:

Python’s Meteoric Rise: From 2016-2018, KDNuggets and Kaggle report that Python overtook R as the most used programming language for data science-related purposes: today, more than 65% of all analytics professionals use Python as their primary language. Python has thus made itself indispensable to data scientists.
Effectiveness through Simplicity: Through tools like Numpy, Matplotlib and Pandas, Python offers simple ways of performing massive calculations or producing effective data visualisations, both of which are extremely necessary for even the basics of data science.
The Developer’s Choice: As companies and conglomerates are seeking to realise and implement data analytics strategies to achieve more profitability, faster turnover cycles, and targeted content regulation, more and more people are seeking to hire Python Developers.
Data Science Driving Python’s Growth: According to surveys in 2018 and 2020, more developers and programmers are using Python for data science rather than actual web or app development!
​

Python is the one of the most popular programming languages in the world, but will it continue to be so? What is the Future of Python? Let’s find out.

Originally Published Is Python the future of programming Language?