Python with DevOps: A Small Study 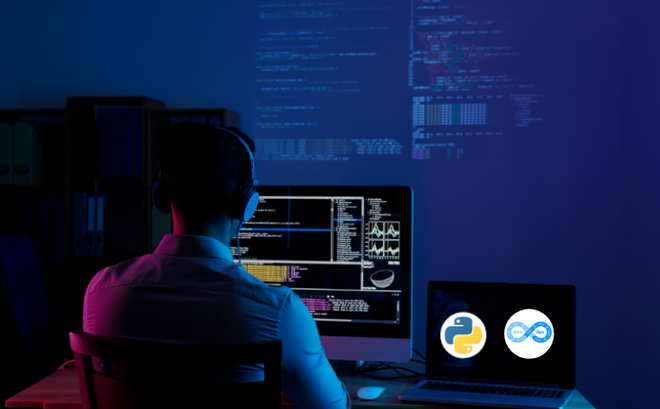 So, being one of the fastest, simple to code, and powerful languages, Python is obviously, quite famous among all the tech people and they always prefer Python when they have to implement a robust backend platform that is impossible to get through.

But, at the same time, DevOps has been in the limelight too. DevOps is not a programming language, not a programming tool or neither a technology. Rather, DevOps is a programming methodology, in which a developer is the operations manager at the same time. In DevOps, the single person is responsible for the development of the project, testing, deployment, and maintaining the CI/CD pipeline of the project. And that becomes the reason why people hire DevOps consultants.

Taking the DevOps route can grant you with a lot of pros, as DevOps route is cost-effective and lesser time-consuming. So, DevOps is chosen by a lot of companies these days. Here are some DevOps pros which you simply can’t ignore!

With DevOps, one can release product updates frequently. Like every alternate days or every week, and the process isn’t even any hard to do so.

When you follow DevOps, you can simply minimize the development cost as development, testing, and project maintenance all of those tasks are carried out by a single person or a small team which minimizes your project development cost.

For these reasons, people hire Python Consultants which puts their development work in a fixed and effective methodology, which boosts the development and offers better results.

Python is the most love programming language and no programmer can deny this fact. As Python is easy to program and secure, and also Python scripts are platform-independent, everyone likes it and build their platform on the Python platform. So, it is one of the reasons why should you choose Python with DevOps.

Python provides us with the facility to write scripts for structured and readable automation. This helps us work with automation scripts easily. It will allow us to eliminate repetitive tasks by automation and reduce the manual work from the project and handle the project with effectiveness!